What is the bile duct?

The liver produces bile which is an important fluid that aids in the breakdown of fats so they can be absorbed in the gut. The bile duct is the main drainage tube which bile flows down from the liver into the small bowel.

What are bile duct tumours?

Bile duct tumours are most commonly malignant, and are also known as cholangiocarcinomas. These can arise within the draining tributaries of the bile duct in the liver, or in the duct itself outside the liver. The management of a bile duct tumour will often depend on where it has arisen.

What are the symptoms bile duct tumours?

When flow down the bile duct is obstructed, for instance by tumour, this may present with jaundice - a yellowing of the skin and whites of the eyes caused by a deposition of the bile salts within the skin and other tissues. The urine may become a dark tea colour as bile salts are excreted through the urine. This can be associated with itchy skin, known as pruritus. It is important to know that there are other more common causes of jaundice, such as an obstruction due to a gallstone in the bile duct, or rarer inflammatory conditions such as sclerosing cholangitis, and liver problems such as hepatitis or cirrhosis. If you do become jaundiced it is important to see a GP or specialist to investigate the underlying cause.

What tests are performed for a bile duct tumour?

Often your GP will have performed some basic blood tests such as liver function tests to further investigate jaundice. Typically, staging investigations such as an ultrasound, CT scan or MRI scan will be required. Other investigations such as endoscopic ultrasound or ERCP (a special type of endoscopy allowing a wire or catheter to be placed in to the bile duct) may be necessary to confirm the diagnosis. When EUS or ERCP is performed potentially a sample of cells can be taken for the pathologist to assess for a tumour. ERCP can also enable placement of a drainage stent to unblock the bile duct and enable the bile to flow again.

How are bile duct tumours treated?

Treatment can depend on several factors including how fit and healthy you are, the stage of the tumour, confirmation of the diagnosis and the position of the tumour. If there is no evidence of spread to other organs then surgery will often be the mainstay of treatment. if the tumour has arisen in the liver this may well require a liver resection. Tumours arising within the lower part of the bile duct may require a pancreatic resection, known as a Whipples procedure, to manage. Both chemotherapy and radiotherapy may be considered as adjuncts to surgery depending on the stage of the tumour.

Where there is evidence of tumour spread to other organs often blockage of the bile duct can be managed with endoscopic procedures such as an ERCP.

What is the prognosis of a bile duct tumour?

Prognosis depends on a number of factors including:

This should be discussed further with your Surgeon or Medical Oncologist after reviewing your relevant results. 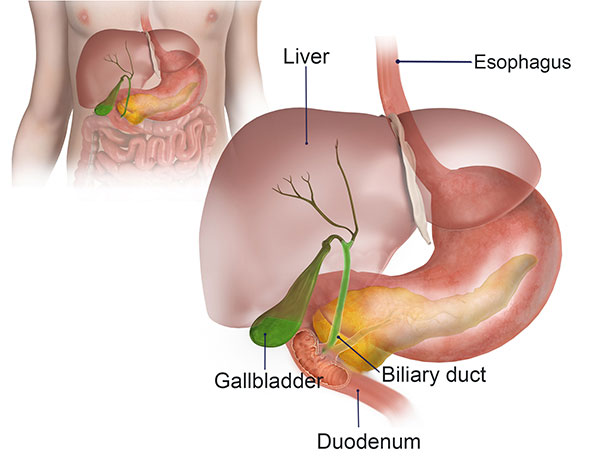